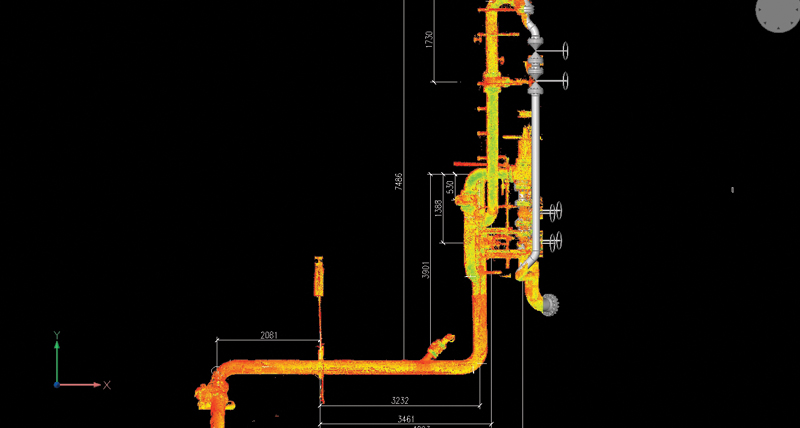 Italteleco, an Italian engineering services company, was hired by an owner operator to digitalize its existing oil refinery in Italy. The plan was to digitalize existing as-built facility documentation to improve and optimize the plant turnaround process for critical refinery units.

Overcoming challenges
The oil refinery facility was approximately 40 years old – as was some of the documentation. There have been additions and changes to the plant over the intervening years, so that there are now several different piping specifications in place.

More challenging still is that these additions and changes were completed by several different contractors, each using their own design and engineering solutions. Italteleco began the project with a confusing mass of incompatible documentation about different piping specifications.

These different piping specifications complicated the development of intelligent 3D models of the unit. The creation of coherent, standardized information for the as-built facility was also a challenge.

Building fully accurate 3D models
The initial as-built model was created by Italteleco in 2017. Initially the project was focused on the major production and conversion facilities. The refinery consists of approximately 50 units, including 11 that are essential for production.

Italteleco chose Hexagon’s CADWorx Plant Professional, Leica Cyclone and Leica Cloudworx to create the model for their cost-effectiveness and interoperability of the solutions. Using these tools, it was able to rationalize and standardize the specifications used across the facility to create intelligent 3D piping models of the 11 critical units.

Initially Italteleco completed a laser scan survey of the facility to obtain a point cloud using a Leica RTC360 3D scanner. The scan was then processed using Leica Cyclone to transpose the point cloud into the plant coordinate system.

At the same time, CADWorx Specification Editor was used to create accurate and complete piping specifications, including all the details missing from existing documentation. This includes important information like types of components and piping thickness. All the components were assigned material codes to match the SAP management system used by the refinery, allowing them to create accurate bills of materials directly from the CADWorx 3D models.

The second step was to begin modeling the actual pipework in CADWorx Plant Professional. Using P&IDs to retrieve information – such as piping specs by a line number – every pipeline was modeled individually by digitizing each mapped point in the point cloud. This enabled the pipeline routing and centerline to be accurately mapped. Pipe and piping components were then placed on this centerline to route the complete 3D pipeline.

Using CADWorx, Italteleco was able to create a single model for every pipeline, and all rotating and static equipment, focusing on nozzle positions and ratings. It was then able to model other parts like roads, buildings and piping racks using Leica CloudWorx and CADWorx Plant Professional.

What did Italteleco gain?
The combination of the 3D model and point cloud was also used to perform dynamic clash checks, for example, to simulate lifting and positioning of equipment and verify any possible clashes. The 3D models were also integrated with Primavera to assist with turnaround schedule management and simulation. These integrations allowed the client to optimize the entire piping replacement process as the refinery was upgraded.

After creating the intelligent as-built models, Italteleco used Navisworks to assemble all the individual models into a single unit model in a single environment.

As well as making plant specification and design information more widely available, digitalization has generated measurable benefits. The automated calculation of bill of materials lowered the error rate by 30% compared to manual work processes, for instance. Italteleco has also helped the oil refinery operator to automate and accelerate many of their activities to further reduce operating costs. This has made the process of creating and maintaining documentation more accurate, less time consuming and cheaper – laser scan technology ensures that the maximum error limit is just 3mm per pipeline.

You can read the complete case study here to learn more about what Italteleco achieved with Hexagon solutions.